Tuesday 3 December 2019, Government Buildings Lecture Theatre 1, VUW Pipitea Campus<\em>
https://vstream.hosted.panopto.com/Panopto/Pages/Viewer.aspx?id=af8516ca-7317-4de5-b31b-ab19001cfd31 (for Content or Captions click on lower left box)
In the summer of 1979-1980, Nigel spent four months at Scott Base on Ross Island. In this talk he takes the audience back 40 years to his dream of a summer in Antarctica as the official reporter and photographer, living at the original Scott Base, and flying with scientists into their field areas to report on their work. He also shares his memories and his work in covering the tragedy of flight TE 901. Nigel taught political science for many years, and became the face of TVNZ’s coverage for numerous general elections. https://www.wgtn.ac.nz/hppi/about/staff/nigel-roberts 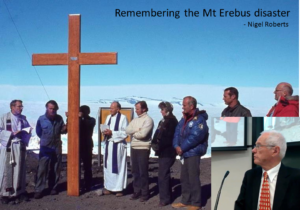 In this talk Tim presents two different narratives on the future of Antarctica and the Southern Ocean looking forward 50 and 300 years. In the first, greenhouse gas emissions remain unchecked, the climate continues to warm, and the policy response is ineffective. In the second, ambitious action is taken to limit greenhouse gas emissions and to establish policies that reduce anthropogenic pressure on the environment, slowing the rate of change in Antarctica. Choices we make in the next few years determine Antarctica’s long term future. Tim recently gave a similar talk in London to the Antarctic Parliamentarians Assembly. 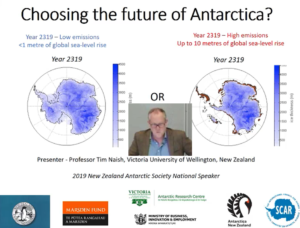